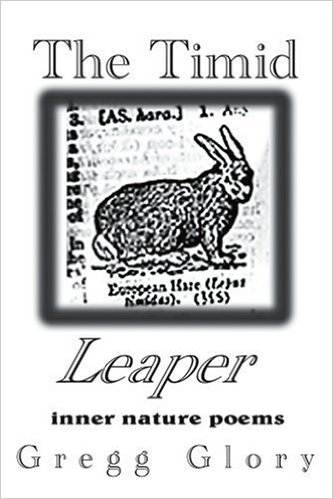 The Thrush at the Sill

My conscience is grass

Walk in the Hush

Preface to The Timid Leaper

Catastrophes and Trophies
Report from a Victor and Victim

This collection is actually the combination and slight rearrangement of four separate volumes of verse; almost all of these poems were written in the calendar year 200I. It’s not much to show for a year of human life–that rich mystery we are twisted into by such a resolute hand. The main emphasis of this collection (as I hope will be quite clear) is Nature. Nature and Naturalism are not quite the same thing, however, and I have always had my own disagreements with those who took too dogmatically Thoreau’s painful premise “Simplify, simplify, simplify.” The Timid Leaper sets the keynote of this mixed approach. I hope this collection achieves some grace while trying to attain such goals. It is the beauty of man’s reach exceeding his grasp. The Timid Leaper leaps, not from any discernible goal he might attain, but from some more subtle cause, some interpenetration of events that defies analysis and germinates poesy. The sub-title is “inner nature poems,” and that is to help show that the weather for humans is never merely a matter of what’s over our heads it’s what’s in our hearts as well.

A victim of depression during the composition of these verses, I noticed an inability or unwillingness to assign purpose within myself. I was lax and ready to suffer unmitigated disasters with little more than a shrug and a tear. This is really a rather hopeless state of affairs, as a number of the poems outline. I remained staunchly impressed, however, with Dame Nature’s capacity to excite the recognition of meaning within myself. As meaningless and adrift as I may have been, I could not help but notice that Nature still evoked in me the wry acknowledgement of a more masterful hand in the pictures I kept seeing both before me and within me. “No Wood to Sing Through” shows the adaptability of natural instincts and impulses. It was inspired by my observation of a catbird still thriving without its native habitat, and by my own reflection that I was seeing something meaningful even when my depression had revoked my self as any inherent source of meaning. Something was helping meaning to survive even in the brain of someone who refused the acknowledgement of meaning. Something in me wanted, at least, for meaning to survive or, more exactly, for the expression and acknowledgement of meaning to continue happening, despite my conscious wishes. This is a form of nature’s nurturing weather that is both harsh and humbling. Can’t I be meaningless if I want to? Don’t take that shred of self-definition away from me! But, opposite of Sartre perhaps, it seems that meaning remains contiguous with essence, even when that essence wishes to exile meaning. It is this co-created weather of inner and outer that is charted in this volume of verses.

Full of wily wit and a bastard’s bravado, The Sword Inside was the first burn and purge preparing a place for a new self to take up residence. I had to be rid of old hopes that I had harbored too long. Hopes are the white lilies of the soul, and when their time is past, they fester as fast. There were reconciliations to be made here as well, and rueful acknowledgement followed hard upon the heels of aptly rapid self-wit. Well-rooted weeds and lingering things were burned out, or hacked at with a saber. Some villainy of habit and temperament had to be acknowledged and integrated, a black sheep returned to the fold. Such traceries of whim explored and displayed in The Sword Inside were the iron rungs I used to clamber back from the void.

The section entitled “The Soft Assault” stands apart for its being the documentation of a very severe personal storm and so shows the purely human side of the weather. Nature purists and vegans of nature poetry may safely skip this section if they do not want their nature poetry too irredeemably mixed up with the human roots of that poetry in the poet. This section is the fever chart of one of love’s bitterest victims. The natural phenomenon of the “inner weather” gives these poems their place in this collection. My retreat into nature, and nature’s “soft pursuant touch” of my capacity to keep seeing meaning no matter what, are a direct result of the catastrophes alluded to within these poems.

Indeed, it was nature’s “soft, pursuant touch,” that I could not shake off, and that led me back to myself as more than a recording barometer of outside events. Nature creates great art, but she uses dirty fingers. Soon enough, I was actively pursuing designs and meanings of my own in the material that Nature had fauceted upon me. I was ready to assign parts to clouds and prompt the trees with dialog. When this hubris expressed itself too heavy-handedly, the poems themselves rebelled and those poems have been expelled from this collection as a complete botch. But, as I now think significant, I was saved. And more than saved, I had become a victor from being a victim. Out of my personal catastrophe, I have extracted this volume of verses, which will serve as well as anything for a trophy.

Posts in this category

Gregg Glory [ Gregg G. Brown ] has devoted his life to poetry since happening across a haiku by Moritake, to wit:

Leaves
float back up to the branch--
Ah! butterflies.

He runs the micro-publishing house BLAST PRESS, which has published over two dozen authors in the past 25 years. Named in honor of the wild Vorticist venture by Ezra Pound and Wyndham Lewis, BLAST PRESS is forward-looking and very opinionated.

He still composes poems on his departed father's clipboard, which he's had since High School.